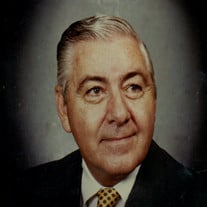 Thomas Ed Edward Long, age 92 of Conyers, born November 25, 1925 in Fredericksburg, VA, went to his eternal Heavenly home on Wednesday, November 14, 2018. Ed was preceded in death by his parents, William and Ella Long; sister, Mary Ellen Long; brother, William Evans Long. He is survived by his wife, Jean Perry Long of Rockdale County; special niece and nephew, Elaine and Randy Cole of Covington, who were Mr. Long's caregivers; numerous nieces and nephews. Mr. Long was a graduate of George Washington University located in Washington, DC. He served in the U.S. Army during WWII from 1944 to 1946. He was employed by the National Security Agency in Washington, DC from 1951 to 1954. From 1954 through 1987 Mr. Long was employed with The Aetna Casualty and Surety Company as Bond Manager in Aetna Bond Department in Atlanta, managing various locations throughout the United States. Ed served as the 1992-1993 President of Kiwanis Club of Rockdale County. Mr. Long was Chairman of Reagan's Home Care Pharmacy Coffee Club and enjoyed the camaraderie of those members. He resided in Rockdale County since 1970, where he met and married the love of his life, Jean Perry Long. Mr. Long was an avid golfer and spent most every Saturday on a golf course. His wife, Jean, was a member of Conyers Garden Club and Ed enjoyed assisting her in their beautiful gardens around their home. Ed exemplified the true meaning of the word gentleman to all who had the privilege and pleasure to know him. Going home Funeral Services will be held Wednesday, November 21, 2018 at 2:00 p.m. at Scot Ward's Green Meadow Chapel with Dr. Jim Martin and Reverend Jan McCoy officiating; interment will follow at Green Meadow Memorial Gardens. Family will receive friends on Tuesday, November 20, 2018 from 2:30 until 3:30 p.m. at the funeral home. In lieu of flowers, the family requests donations to Alzheimer's Association at www.alz.org. Condolences may be submitted on-line at www.scotward.com. Scot Ward Funeral Services, 699 American Legion Road, Conyers, GA 770-483-7216.

The family of Thomas Edward Long created this Life Tributes page to make it easy to share your memories.

Send flowers to the Long family.