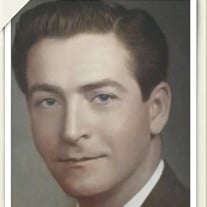 Mr. Walter Hyman Rabon, Sr., age 90 of Conyers, died Tuesday, October 15, 2019. He was preceded in death by his parents, Emerson Ethell and Lissie Viola Rabon; brothers, Rowland Rabon, William Rabon, Zeb Rabon. He is survived by his wife of 55 years, Jean Rabon; son and daughter-in-law, Walter and Kathie Rabon, Jr.; grandchildren, Walter Rabon, III, Wyatt and Olivia Rabon, Westin Rabon; sister, Gladys Johnson; numerous nieces and nephews. Walter was born in Aynor, SC on a tobacco farm. After he graduated from Aynor High School, he hitchhiked to Atlanta where he was employed with Western Union Telegraph. He was drafted into the U.S. Army where he served during the Korean Conflict. After being honorably discharged he returned to Western Union and was employed for 26 years. He then built a successful career in the construction industry. Walter enjoyed hunting, fishing and most of all spending time with his family. Mr. Rabon was a member of Zion Baptist Church for many years. Funeral Services will be held Friday, October 18, 2019 at 11:00 a.m. at Zion Baptist Church, 7037 Hwy 212 N., Covington, GA 30016, with Rev. Frank Daws and Pastor Randy Reese officiating; interment will follow at Fairview Memorial Gardens. Family will receive friends Thursday, October 17, 2019 from 5 until 8:00 p.m. at the funeral home and from 10 until 11 a.m. prior to the service at the church. In lieu of flowers, donations may be made to Missions at Zion Baptist Church. Condolences may be submitted on-line at www.scotward.com. Scot Ward Funeral Services, 699 American Legion Rd., Conyers, GA, 770-483-7216.

The family of Walter Hyman Rabon, Sr. created this Life Tributes page to make it easy to share your memories.