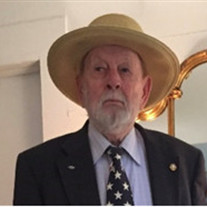 William C. Bradford, age 88, of Conyers passed away Wednesday January 2, 2019. He was preceded in death by his wife of 56 years Virginia Brooks Bradford; parents, James and Belle Bradford and brother, Charles Bradford. He is survived by sons, Michael Joseph Bradford, Mark William Bradford (Diane), Mitch Alan Bradford (Stephanie); sisters, Joan Hull and Linda George (Jimmy) and brother, Raymond Bradford (Virginia); grandchildren, Laurie, Mollie, Tyler, Daniel, Andrew, Jarrett, and Davis; great-grandchildren, Gloria Isabelle Howard, Catherine Elizabeth Draudt, Andrew Michael Bradford and Emillie Faye Loggins; many nieces and nephews. Mr. Bradford was born in Rockdale County, GA on January 16, 1930 to James and Belle Bradford. He graduated high school in 1948 from the Berry Schools in Rome, GA. After leaving Berry, he enlisted in the United States Army during the Korean Conflict and after training at Fort Hood, Texas was fortunate to be shipped to Germany for the remainder of his tour of duty where he also established a life-long friendship with the Wagner family. Mr. Bradford then enrolled in the International Brotherhood of Electrical Workers (IBEW) apprenticeship program in Atlanta and began a life-long affiliation with Local Union 613. During his apprenticeship, he was reacquainted with former Berry classmate Virginia Brooks after meeting at the old Plaza Drugstore on North Highland Avenue. They discovered their apartments were only a few miles apart with hers in the old Candler Mansion in Inman Park and his in a home on Springdale Road. They eventually married on October 30,1955. In 1962, Mr. and Mrs. Bradford and their two young sons, Mike and Mark moved from Atlanta to very rural Conyers after buying the former family farm homeplace of Mr. Bradford's mother, Belle Wilson Bradford. It is a much loved property that was his home for the rest of his life. Third son Mitch was born in 1965. In 1963, Mr. and Mrs. Bradford established the first professional child care center in the county, and operated Bradford's Day Care for ten years before selling the successful business. Besides gentleman farmer, Mr. Bradford continued electrical work eventually with his own contracting company before joining IBEW L.U. 613 full time as Asst. Business Agent and finally Labor Liaison through United Way of Atlanta until retiring in 1993. He was also a proud Democrat and served a number of years as a committee member of the Democratic Party of Georgia. In all of these endeavors, he used his limitless talent for fearlessly making friends and discovering common interests that often resulted in a lasting bond. He was also a loyal member of the Yaarab Shrine Temple Atlanta; Gleaner Chapter Order of the Eastern Star and a Freemason for more than 50 years. He was also a proud member of the 'Liar's Club' and enjoyed their daily meetings at Beasley's Pharmacy lunch counter. Mr. Bradford thoroughly enjoyed every day of his more than 25 years of retirement as an avid golfer; charter NASCAR racing fan that included 50 consecutive years attendance at the Daytona 500 and extensive travel. His love for driving was well demonstrated by his famous/infamous Buick Roadmaster which clocked almost 400,000 trouble free miles. He was a dedicated member of Rockdale Baptist Church and the Truthseeker's Sunday School class as well as a faithful weekly visitor and friend to many care home residents. Most of all, he loved, enjoyed and appreciated his extended family with a special place for grandchildren. He will be missed by all those whose lives he touched. Funeral services will be held Sunday, January 6, 2019 at 2:00 o'clock in the afternoon at Rockdale Baptist Church, 1295 Smyrna Road, Conyers, GA 30094 with Rev. Fred L. Maddox and Rev. Billy Moss officiating; interment will follow at Green Meadow Memorial Gardens. Family will receive friends Saturday, January 5, 2019 from 5 until 7 p.m. at the funeral home. Those who wish may honor his memory by contributing to a favorite charity. Scot Ward Funeral Services, 699 American Legion Road, Conyers, GA 30012, 770-483-7216.

William C. Bradford, age 88, of Conyers passed away Wednesday January 2, 2019. He was preceded in death by his wife of 56 years Virginia Brooks Bradford; parents, James and Belle Bradford and brother, Charles Bradford. He is survived by sons,... View Obituary & Service Information

The family of William 'Bill' Caldwell Bradford created this Life Tributes page to make it easy to share your memories.

Send flowers to the Bradford family.