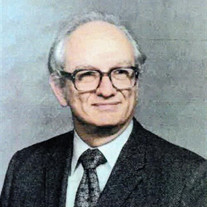 An amazing man has left us and has gone to be with our Lord Jesus Christ. William Earl 'Bill' Bunn, age 88, left his family and friends on March 9, 2019 after a brief illness and now rests in the comforting arms of our Savior. Mr. Bunn, a resident of Conyers, Georgia, was born December 25, 1930 in Wichita, Kansas. He grew up in Kansas and Oklahoma, graduating from Chanute High School in Chanute, Kansas in 1949. Bill graduated from Chanute Junior College in 1951 and from Wichita State University in 1953, receiving a degree in Business Administration. He married Barbara Beck on August 24, 1952, they have celebrated 67 years of marriage. She survives at their home. After graduation, Bill entered the U.S. Navy, serving during the Korean Conflict on a destroyer in the Pacific Fleet where he attained the rank of LTJG. While in the Navy, he became interested in electronics which provided the foundation for his lifetime career. Upon leaving the Navy, he attended the University of Oklahoma receiving a degree in Electronic Engineering. He then joined the Federal Aviation Administration (FAA) from which he retired in 1990, having served as the Chief of NADIN operations at the Air Traffic Control Center at Hampton, Georgia. Bill enjoyed many hobbies including boating, fishing, amateur radio, and playing piano and organ. He was well known as an expert 'fix-it' man. His many interests continued throughout his life. At the age of 72, he began riding motorcycles and rode for several years with a local group. In the 1960's he built an electronic organ and in the 80's built his own personal computer long before computers were widely used. He was a self-taught man, always delving into 'how to' sources for information. Even during the last months of his life, he was studying and practicing in an effort to learn to play the guitar. He was preceded in death by his parents, Earl and Audrey Young Bunn and brother, Robert E. 'Bob' Bunn. He is survived by his wife of 67 years, Barbara Bunn, a son, Benjamin J. Bunn, Sr., Conyers, GA; daughter, Teresa (Lee) Braswell, Springfield, GA; and six grandchildren, Natalie (Scott) Lange, Cypress, TX, Benjamin Bunn, Jr., Spring, TX, Bryan Grantham, Springfield, GA, Leon Mincey, Conyers, GA, Joshua Mincey, Conyers, GA, William Mincey, Springfield, GA; and seven great-grandchildren. Also, surviving are a sister, Doris Bunn McDermott, Charles Town, WVA; niece, Robin (Alan) Blalack, Charles Town, WVA; nephews, Dr. Timothy (Becky) McDermott, Louisville, KY and Stephen (Melanie) Bunn, West Plains, MO; and special caregiver, Gail Walden, Gray GA. A Graveside Service was held at 11 a.m. on Saturday, March 16, 2019. Burial was in the Memorial Park Cemetery, Chanute, KS. The American Legion Honor Guard was in charge of military honors. Condolences may be submitted on-line at www.scotward.com. Scot Ward Funeral Services, 699 American Legion Road, Conyers, GA 30012, 770-483-7216.

An amazing man has left us and has gone to be with our Lord Jesus Christ. William Earl 'Bill' Bunn, age 88, left his family and friends on March 9, 2019 after a brief illness and now rests in the comforting arms of our Savior. Mr. Bunn, a resident... View Obituary & Service Information

The family of William Earl Bunn created this Life Tributes page to make it easy to share your memories.

An amazing man has left us and has gone to be with our Lord Jesus...

Send flowers to the Bunn family.