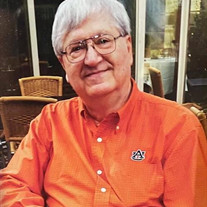 William (Bill) Leonard Jones died July 4, 2021, in Watkinsville, GA. Born in Atlanta, GA on January 22, 1944, Bill was the oldest of two sons of Aubrey and Mary Kathleen (Samples) Jones. As a child, Bill moved with his family to Jacksonville, FL where he spent many years and happy times fishing, boating, and skiing as a young man. He graduated from Alfred I. duPont High School, which is where he met his wife of 57 years, Laura Jeanne Bennett Jones. After high school, Bill served his country in the Florida National Guard. Following their marriage in 1963, Bill and Jeanne moved to Atlanta, and then Conyers. Bill and Jeanne lived in Conyers for 45 years, where they raised their daughters, and were actively involved in the local community. In high school, Bill became an accomplished musician. He was an excellent clarinetist, amateur musicologist, and audiophile. He especially loved Mozart, Dave Brubeck, Bill Evans, and Elvis. Along with music, Bill loved photography and golf. He held a photography exhibit at the Depot in Conyers, Georgia, which featured scenic works from Atlanta and Conyers. Bill's talents in photography led him to take beautiful photos of the Monastery of the Holy Spirit and Augusta National Golf Course. In 1980, his photographs of Augusta National were featured in the annual Masters' yearbook. Though his first job was as a paperboy, as an adult Bill worked for companies including Muellers and Creamettes. Bill never met a stranger and could talk with anyone about anything, often at great length. These skills undoubtedly helped him become a successful, award-winning salesperson. Bill enjoyed supporting his communities, leading softball fundraisers for Elks-Aidmore Children's Home, and hosting sponsor events for the Peachtree Road Race. He loved Atlanta and took his daughters to see the Rich's tree lighting and pink pig every year when they were young. Bill was the biggest champion of his wife and daughters. He supported all three of them as they earned college degrees. As most anyone who met him knew, his pride over his daughters becoming an attorney and college professor knew no bounds. Bill also helped Jeanne find her birth family in 1980. Reuniting families became his purpose in life, and Bill became an investigator to help adoptees and birth families find one another. Bill reunited over 2,000 family members and helped establish the Georgia Adoption Reunion Registry. This registry continues Bill's work today. Bill's greatest and most beloved role in life was as Grandaddy to his three grandsons, William Jesse French, Cade Richard Draves, and Kai Aubrey Draves. He made it a point to be there for everything he could, and always with his camera. He spent many precious hours rocking them as babies, volunteering at Eastminster School, taking them to see trains, teaching them to fish, having root beer floats together at Beasley Drugs, attending soccer games and triathlons, and documenting their lives with photos that will be cherished for generations. Bill is survived by his wife Jeanne; daughter Laura Jones French, son-in-law Kevin French, and grandson William French; daughter Tami Jones Draves, son-in-law Ian Draves, and grandsons Cade Draves and Kai Draves; brother Larry Edward Jones and sister-in-law Maxine Jones; loving nieces, cousins, and friends. We like to think he went out with a bang on Independence Day, and know he'd get a kick out of that. A memorial service for William Leonard Jones will be held at Conyers Presbyterian Church in Conyers, Georgia on Saturday, January 22, 2022, at 2:00 p.m., on what would be his 78th birthday. Donations in Bill's memory can be made to organizations he supported during his life, including some of the places he spent wonderful times with his grandsons. Oconee Futbol Club www.oconeefc.com, Greensboro Science Center www.greensboroscience.org , Elks-Aidmore Children's Home www.elksaidmore.com. Scot Ward Funeral Services, 699 American Legion Road, Conyers, GA 30012, 770-483-7216.

William (Bill) Leonard Jones died July 4, 2021, in Watkinsville, GA. Born in Atlanta, GA on January 22, 1944, Bill was the oldest of two sons of Aubrey and Mary Kathleen (Samples) Jones. As a child, Bill moved with his family to Jacksonville,... View Obituary & Service Information

The family of William Leonard Jones created this Life Tributes page to make it easy to share your memories.

Send flowers to the Jones family.