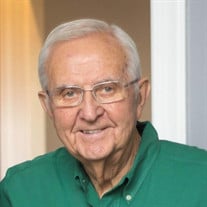 William Preston ‘Pete’ Keel, Jr., age 88, passed away on Tuesday, March 10, 2020, in Conyers, Georgia. He was born on May 19, 1931, on a tobacco farm in Bethel, North Carolina, to William and Bessie Keel, Sr. Pete proudly served in the United States Army during the Korean War, which fortuitously (given his distaste for tobacco) brought him to Atlanta. After his discharge, Pete found employment as a technician with Western Electric (AT&T)—an occupation he would happily and successfully maintain until his retirement 37 years later. Soon thereafter, Pete risked going on a blind date with a co-worker’s sister. There, he met Barbara, who would become his true love, the jewel of his life, and cherished wife of 64 years. Pete and Barbara would later have two children—Monica and Derik—and enjoy the quintessential American lifestyle for decades. Pete devoted his life to serving his wife, his family, his church, and the broader community. He was an integral member of the Telephone Pioneers of America, which performed a variety of charitable projects. He served his community in many ways, including by working for the Rockdale County Board of Elections for over 15 years. Pete was also a longtime member (and deacon) of Philadelphia Baptist Church in Conyers until he and Barbara became members of Rockdale Baptist Church. Both churches entrusted him to count collections, a duty in which he took considerable pride. He actively participated in many other church activities, including being a member of the Partners Sunday School Class and Happy Hearts Senior Organization. Among other interests, Pete always relished his bi-annual participation at AmericasMart in downtown Atlanta, where he met many travelers and made many friends over 25 years. Pete was also an avid gardener, known especially for his okra and tomatoes, which he liberally supplied to friends and family. As anyone who ever passed by his and Barbara’s home on Klondike Road can attest, his devotion to his yard and its upkeep was keen, and second only to his devotion to his family. Indeed, it was his family that gave Pete his greatest sense of accomplishment. Known as “Hadaddy” to his six grandchildren, great-grandson and their friends; Pete was an inseparable participant in their lives and a powerful force in shaping their characters and values. Pete died as he lived—surrounded by his adoring family. He is survived by his loving wife, Barbara, his daughter, Monica Hendrix, and son and daughter-in-law, Derik and Catharine Keel; grandchildren, Christopher Hendrix, Daniel Hendrix, Luke Hendrix, Caitie and Mike Kennedy, Mikaila ‘Gabbie’ Keel, Brie Keel; great-grandson, Dylan Hendrix; brothers and sisters-in-law, Gene and Sara Keel, Jimmy and Linda Keel; sister-in-law, Pat Edwards; and several nieces and nephews. Funeral services will be held Saturday, March 14, 2020 at 2:00 p.m. at Rockdale Baptist Church, with Rev. Dr. Billy Moss officiating, Mr. Keel will lie in state from 1:00 p.m.-2:00 p.m., at the church; interment will follow at Green Meadow Memorial Gardens. The family will receive friends Friday, March 13, 2020 from 5:30 until 8:30 p.m. at the funeral home. Condolences may be submitted on-line at www.scotward.com. Scot Ward Funeral Services, 699 American Legion Rd., Conyers, GA, 770-483-7216. In lieu of flowers, the family asks that donations be made in Pete’s name to St.Jude Children's Research Hospital.

The family of William Preston Keel, Jr. created this Life Tributes page to make it easy to share your memories.