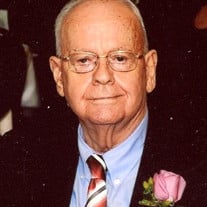 Rev. William Hartwell 'Bill' Kirby, age 86 of Conyers, died Friday, February 21, 2020. He was born May 31, 1933. His parents were Bessie Hornsby and LeRoy Kirby. Upon graduation from high school, he attended The Citadel, The Military College of South Carolina. On September 5, 1953 he married Joann Sandra Cadle. Joann and Bill had three children, Cheryl Chamlee (Hoyt), Sandra Alliston (Turk) and Allen Kirby (Virginia). In February of 1953 he was employed by the Explosive Division of E.I. DuPont and worked at the Savannah River Plant, an Atomic Energy Installation located in Aiken County, SC. He worked there as a radiation control engineer. In June of 1959 he left DuPont and entered the Candler School of Theology of Emory University. He graduated from Candler in December of 1965 and certified in the area of Gerontology, Religion and Aging by GA State University and was awarded the Master of Divinity Degree. From June 1959 he served a number of churches in the North GA Conference. Bill retired from the North GA Conference in June 2001 after forty-two years of service. He was preceded in death by his spouse, Joann Kirby. In addition to the survivors listed he is survived by four grandchildren, Chris Alliston (Tina), Matt Alliston (Katie), Jennifer Kirby, and Kevin Kirby; great-grandchildren, Noah Alliston, Judson Alliston, Tripp Alliston, Hailey Alliston; and sister, Mary Carolyn Moore. Funeral services will be held Monday, February 24, 2020 at 3:00 p.m. at Scot Ward's Green Meadow Chapel with Rev. Dr. Dane Wagner and Rev. Dr. Gary Whetstone officiating; interment will follow at Green Meadow Memorial Gardens. The family will receive friends from 1:00 until 3:00 p.m. prior to the service at the funeral home. Condolences may be submitted on-line at www.scotward.com. Scot Ward Funeral Services, 699 American Legion Rd., Conyers, GA, 770-483-7216.

Rev. William Hartwell 'Bill' Kirby, age 86 of Conyers, died Friday, February 21, 2020. He was born May 31, 1933. His parents were Bessie Hornsby and LeRoy Kirby. Upon graduation from high school, he attended The Citadel, The Military College... View Obituary & Service Information

The family of William H. Kirby created this Life Tributes page to make it easy to share your memories.

Send flowers to the Kirby family.