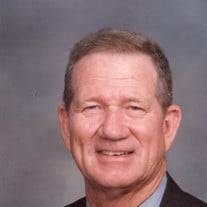 William E. McCord passed away peacefully following a long illness Saturday, May 21, 2022. Coach, as he was called by friends and family who adored him, was 92, having started life in Alexandria, AL. After excelling in sports as a youth, he attended Jones Junior College for two years before serving as a medic in the United States Army during the Korean War. Once discharged, he completed college as part of a championship football team at Delta State University where he met and married Virginia Truitt. Together, they adopted three children and poured themselves into multiple educational communities as teachers and coach, ultimately making Conyers their home. After many years at Rockdale County High School leading and growing students in the classroom and coaching football, baseball and basketball, he obtained a Master�s degree at UGA and finished his career as Director of Transportation for the Rockdale County School system. After retiring he and Virginia enjoyed life, camping and traveling the US until her death separated them. He was fortunate to find another happy marriage with Willa Cantrell, and continued a full, happy life. He was preceded in death by his wife, Virginia; and his son, David. He is survived and mourned by wife, Willa; son, Scott; daughter, Paige; as well as grandchildren, Kayla and Jacob. Funeral services will be held Wednesday, May 25, 2022 at 3 PM at Conyers 1st United Methodist Church with Rev. Randy Byrd and Pastor Chris Shurtz officiating; internment will follow at Green Meadow Memorial Gardens. The family will receive friends Tuesday, May 24, 2022 from 4:00 PM to 6:00 PM and 6:30 PM to 8:00 PM at the funeral home. Condolences may be submitted on-line at www.scotward.com . Scot Ward Funeral Services, 699 American Legion Rd., Conyers, GA, 770-483-7216.

William E. McCord passed away peacefully following a long illness Saturday, May 21, 2022. Coach, as he was called by friends and family who adored him, was 92, having started life in Alexandria, AL. After excelling in sports as a youth,... View Obituary & Service Information

The family of William McCord created this Life Tributes page to make it easy to share your memories.

Send flowers to the McCord family.