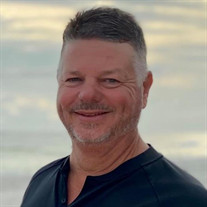 William Vernon Seabolt, affectionately known as Skipper, age 56 of Mansfield, passed away Saturday, October 2, 2021 surrounded by his family. He is preceded in death by his parents, Charles 'Chuck' and Hazel Seabolt; brothers, Jerry Seabolt, Alan Seabolt and Chuck Seabolt; sister, Julie Seabolt; cousin, Carolyn Cole. He is survived by his fiancé, Molly Peeples; children and their spouses, Krystal (Matthew) Sosby, Kenny Seabolt, Cole Peeples, Kelsey Peeples, and Chandler (Jena) Peeples; grandchildren, Josie, Lane and Annabelle Sosby; nephews, Jason (Lisa) Seabolt, Brian Seabolt, Mark Seabolt, Chris (Becka) Seabolt, Kyle (Julie) Seabolt, Josh (Olivia) Seabolt; aunt, Nellie Cole; beloved fur babies, Bella and Bitty Mae. Skipper was born on March 13, 1965 to Chuck and Hazel Seabolt in Lompoc, California. He attended George Walton Academy and graduated from Rockdale County High School in 1983, where he excelled in both football and baseball. Skipper earned a scholarship to Hiawassee College in Madisonville, Tennessee to play collegiate baseball. In 1985, Skipper was blessed with his greatest title yet - 'Dad'. As his kids grew up, another title he took on was that of 'Coach'. For over 20 years, Skipper dedicated his life to coaching hundreds of young men, including his nephews and son. He was known to be a tough and passionate coach, but if you ever made a mistake, he was sure to remind you 'nobody hurt' - great teams can pick up the pieces and finish the game as winners. Skipper carried on this same spirit in everyday life. His true happiness came with protecting his friends and family, and making sure any and everyone knew they were welcome and belonged. Skipper's favorite pastime was cheering on (or couch coaching) the Georgia Bulldogs and the Atlanta Braves. He also spent quality time playing golf with family and his favorite group of friends, better known as the Sandbaggers. They shared in his victory of hitting a 145-yard hole-in-one on hole 3 of the Honey Creek Golf Course in February 2021. Much like his hole-in-one, Skipper admitted everyone he knew and loved to 'The University of Skipper - Where Everybody is Perfect'. His bottom line is all that matters is who you love and who loves you. That is the legacy he leaves behind. A Celebration of Life will be held Saturday, October 9, 2021 between 11:00 AM and 2:00 PM (drop-in) at the Cross and Crown Pavilion at 2461 O'Neal Rd, Conyers, GA 30094. Condolences may be submitted on-line at www.scotward.com Scot Ward Funeral Services, 699 American Legion Rd., Conyers, GA, 770-483-7216. In lieu of flowers or donations, the family asks that you continue to spread love and kindness just as Skipper always did.

The family of William 'Skipper' Seabolt created this Life Tributes page to make it easy to share your memories.

Send flowers to the Seabolt family.